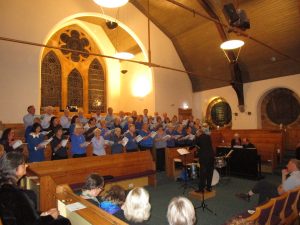 The audiences in Belhaven and North Berwick seemed to enjoy our concerts. We started with a selection of Disney songs, some well known and others that were new to most of us. Supercalifragilisticexpialidocious is easy to say slowly, but the music got faster and faster! Our next set of Beatles songs: Help!, A hard day’s night, Blackbird and Let it be were well received.

In the second half we started with a selection from Oklahoma before the concerts finished with a arrangement of music by Andrew Lloyd Webber climaxing with the title song of the Phantom or the Opera.

In Dunbar we were joined by Vaughan Townhill with three of his fellow instrumentalists who as Gladstone’s Bag played two selections of music from the 19th century.

In the other concert, North Berwick Sings sang some beautiful a cappella songs from America and Scotland.

Carols and Readings
for Christmas